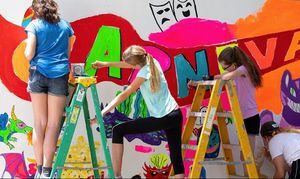 This year marks the 10th anniversary of the Teen Mural Project at the Carpinteria Arts Center.

This year marks the 10th anniversary of the Teen Mural Project at the Carpinteria Arts Center. Each June the Arts Center kicks off the summer with a burst of color, holding a free teen mural event with the additional support of Carpinteria Beautiful, Carpinteria Woman’s Club, Carp Cares for Youth and Señor Frog’s.

Forty-two enthusiastic teens showed up on Tuesday, June 13, to paint a Carnevale-themed 40-foot x 8-foot mural based on the group’s original designs. Throughout the process, teens received guidance from celebrated local muralist John Wullbrandt and a group of adult volunteers.  The teens painted two panels, each 20 ft x 8 ft, that will be transformed into an agamograph—a mural composed of two separate images, cut and constructed like an accordion. As the viewer passes, the images morph from one to the other. The teen mural will be on display in the courtyard at the Arts Center through the fall. The public is invited to a celebration of the completed project immediately following the Independence Day parade on June 30.