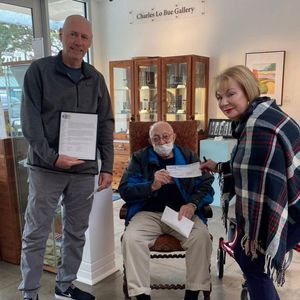 On December 9, Charles LoBue visited the Lynda Fairly Carpinteria Arts Center to deliver a check for $80,000. With that gift, LoBue fulfilled the years-old commitment that he made to donate $330,000 to the arts center during its first capital campaign. Because of his donation, one of the largest at the time, the arts center gallery has his name. LoBue served on the arts center board for 10 years and is a founding member of the Angels of the Arts legacy group.

To read the original article, visit the CVN website here.